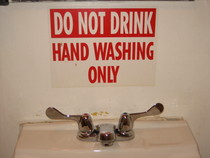 Medieval scientists sought to turn base metals into gold, creating wealth for themselves and their rulers. Likewise, modern science, harnessed by capitalists, seeks to turn fresh water into gold. While the former failed in their explicit goals, they set out a path leading to the field of chemistry. The latter group, led by transnational corporations in the water industry, doubly succeeded. (the Alchemy of Water, Krystal Kyer)

About a month back I was watching a documentary entitled Flow  about the corporate takeover of water as a global resource.  Within minutes I could see the frightening parallels between what the documentary was illustrating about corporations who destroy and wrest control over our most precious resource, water, and how corporations are now wresting control over another precious commodity, public education; and how learning, as a free flowing natural “commodity,” is being bottled and re-sold to us at a profit.  The blueprint for a corporate dominated, private-for-profit takeover of all of our human or material resources and services, is the same regardless of the arena. Education is simply one piece of the pie-or should I say, one drop of water in their bucket?

In this free-market death match arena of today’s economy, education is a commodity like … water.  Water, as naturally occurring resource which has been around since well, when earth was formed, is now a commodity for sale to profit the richest 1%. Looking back at history, Native American peoples and other indigenous cultures saw the greed of the Western Europeans to “own” what the earth brought forth freely as absurd- but conquer and own the Europeans did.  Fast forward a couple hundred years, and water all around the world is now largely owned by a handful of multinational corporations.  While schools, and formal education are neither “naturally” occurring, nor universal human rights yet (though they should be…), the natural, innate capacity to inquire, to seek meaning … to learn, is.  Like water, it is our in our human capacity to learn things.  And it is our right in his country to have free PUBLIC access to equitable, creative, sustainable, meaningful, and quality education for all children.

In Flow, the filmmakers illustrate how deftly corporations pollute (with their factories) clean water sources in economically challenged communities, swoop in and buy the land rights to any viable drinking water left within that community, then bottle (or process in their own facilities) that water and sell it back to the community at a cost-a cost often too high for most people to afford.

Salina builds a case against the growing privatization of the world’s dwindling fresh water supply with an unflinching focus on politics, pollution, human rights, and the emergence of a domineering world water cartel. Interviews with scientists and activists intelligently reveal the rapidly building crisis, at both the global and human scale, and the film introduces many of the governmental and corporate culprits behind the water grab, while begging the question “CAN ANYONE REALLY OWN WATER?”

Is any of this sounding eerily familiar to you?  It should.  In education, public education is starved to the point of dysfunction.  Without viable resources many good educators find it nearly impossible to deliver what they believe to be a meaningful and rich education to the children they serve. They are deemed “failing.”  Then corporations with billions of dollars swoop in with their business models and take over the curriculum, the assessments, professional development, teacher training, and school facilities (via new charter school replacements). I could go on with this list ad infinitum. They sell this all back to school communities in “bottled form” for a huge profit.

The film  concentrates on the big business of privatization of water infrastructure which prioritizes profits over the availability of clean water for people and the environment.  Major businesses depicted in the film are Nestle, The Coca-Cola Company, Suez, and the International Monetary Fund (IMF).

Like water, which takes gas, liquid, or solid forms, learning takes many forms.  And like water, corporations are gathering their wagons to take ownership over what is a naturally occurring phenomena.  So, like water, can anyone, even the all mighty and powerful Bill Gates, Walton Foundation, Eli Broad or Pearson, own learning? They’re sure as hell trying.

Public education has never been given the opportunity to fully realize its true potential as the foundation for a flourishing free and democratic society.  Rather than allowing it to flourish, in spite of volumes of inquiry and evidence for decades (centuries if you want to give a nod to Dewey) to show us how it might be possible, we have instead polluted public education.  If we can send a man to the moon, and split both the atom and the human genome, why for heaven’s sake can we not provide meaningful services or opportunities to ALL school communities? Why can’t we provide resources like ample arts, music and PE programs, widely available pre-natal health care programs, substantive nutritional programs, community wrap around services, clean drinking water, safe and humane building conditions,  public libraries, and community centers to all children, especially those with the greatest needs? It ain’t rocket science. But in times of economic uncertainty these programs are first ones on the chopping block. We have never fully realized these efforts, so how can we say that public education does not work? We have never really tried it.

It’s more profitable to “own” it.

If you need convincing, check the film’s next location: Michigan–where Nestle, the Swiss owner of Perrier, Arrowhead and other water brands, bought wilderness, began pumping water, which is causing streams to dry, flora and fauna to die.  And, the company got financial incentives from the state, didn’t pay taxes and sold bottled water to citizens who did/should/would have the water from their own faucets, for free or minimal delivery costs.

Gosh, that sounds like something right of the playbook for StudentsFirst, Education for Excellence, Carpe Diem Schools, Kahn Academies, Connections Academy, and KIPP.  In Ohio, “since 2001 charter schools have seen an increase in funding of 1285% while traditional public schools have received a measly 25% increase during the same period.”

Once they’ve completed their “manifest desitiny,” how long before they start charging people directly, not just through education related taxes, in order for their children the right to access an education? They’ll have cornered the market after all.

Or here’s another example from the reformer (as water cartel) playbook–the National Common Core Standards.  Any teacher worth her wit looked at Common Core as it was being rolled out, and saw that whatever positive qualities it may have (I concede this is still under much debate), such as promoting critical thinking, recognized that these are the same skill sets that good teachers have been teaching all along.  Like water, how does critical thinking (as a skill to be taught) get captured under the ownership of Common Core? Why does a teacher, or a school, need to pay Pearson millions of dollars for the right to teach something that used to be free and abundant? And not unlike the water ownership policies of corporations that have captured natural sources of water and redistributed them worldwide to people as a commodity to be paid for, this Common Core like the bottled water, is tainted.  Read the ingredients on the label carefully.  The Common Core was written by “real teachers” as much as Nestle water really comes from a natural geyser in some magical fairy land with unicorns.

Research shows that many bottled water companies falsely advertise, claiming that water supposedly from springs in the Swiss Alps was actually culled from a drainage ditch in New Jersey. According to the National Resources Defense Council, in a scientific study in which more than 1,000 bottles of 103 brands of water were tested, about one-third of the bottles contained synthetic organic chemicals, bacteria, and arsenic..

Like many brands of bottled water, this new brand of corporate education is likely to be tainted. According to sound educational research, corporate-model, for profit, brands of education reform contain: school re-segregation (arsenic), mind numbing and meaningless curriculum (synthetic organic materials), a reduction in critical thinking skills (bacteria), and an increase in failing but still profitable charter school chains (bacteria). That’s just naming the top few forms of poison among many.

Why would they do this, you ask? A sane person might query: Isn’t it more profitable in the long run to have a well- educated, healthy, fully-functioning generation of children who will avoid the school to prison pipe line or welfare services? Yes, yes of course it is. Yet, one could also wonder: why it is that corporations choose immediate profit at the expense of clean air and drinking water for an entire planet?  So, should we really be shocked at the lengths to which they’ll go? Why should using children for profit surprise us? After all, it’s not their children going to the schools that are being closed down and being replaced with McDonald’s-like educational services where they choke on high stakes testing and a one-size-fits-all curriculum. Their kids attend the “Whole Foods” schools where all the learning is organic and “free range.”

At present, several multinationals–Nestle, Thames, Vivendi, Suez, Coca Cola and Pepsi are named in FLOW–own and control most of Earth’s fresh water. The film’s experts suggest that since water’s essential to life, these companies are positioned as Earth’s ultimate power brokers. Unless their influence is checked, they’ll be able to blackmail governments to do their bidding.

At present, Pearson along with a few other textbook companies, and powerful corporations with their high paid ALEC lobbyists, own or directly influence nearly all aspects of public education.  The billionaire boys club, as Diane Ravitch coined it,  in bed with the US State Department of Education work diligently to market their reform as “necessary,” and private sponsorship/ownership of our children’s learning as “good.”

I echo Merin here: Unless the corporate education reform takeover is checked, they’ll be able to blackmail our children, families, and communities to do their bidding.