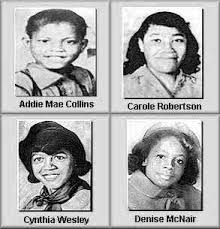 Today in my email I received a message from Edliberation list serve. The message sent on behalf of Randolph Potts said:

At the same time of day this email is being sent, 50 years ago…on Sunday, September, 15, 1963, Robert Chambliss placed a bomb under the steps of the Sixteenth Street Baptist Church in Birmingham, Alabama. The bomb exploded killing Denise McNair (11), Addie Mae Collins (14), Carole Robertson (14) and Cynthia Wesley (14). The four girls had been attending Sunday school classes at the church.
A week before the Birmingham church bombing, Governor George Wallace had told the New York Times that to stop integration, Alabama needed a “few first-class funerals.”  A witness identified Chambliss, a member of the Ku Klux Klan, as the man who placed the bomb under the steps of the Church. He was arrested and charged with murder. On October 8, 1963, Chambliss was initially found not guilty of murder.….

And my mind now recalls a project I did in 1998 while a doctoral student, on this subject. My professor asked me to do research on the events surrounding the bombing of the Sixteenth Street baptist Church and the protests in Birmingham that ensued. I gathered photos taken from photographer Charles Moore whose photographs of the horrific responses to the peaceful protests rocked our nations consciousness.  I also combed copies of old newspapers and magazines (this was before the hey day of Internet research!) for primary sources. I created a Power Point that combined the images taken by Charles Moore with a script I created COMPLETELY OUT OF ACTUAL QUOTES from people at these events, as quoted by the newspapers and magazines of the time. I re arranged the words of the real lived participants so that they would flow as a script. But all the words are the original words as quoted in the primary sources. You will note the “N” word in there-which I chose to XX out–and yet it’s still slightly visible. I chose to XX it out to honor my own anti racist stance as a White female, and yet it remains somewhat visible underneath because that was the actual language spoken by Bull Conor as quoted by the New York Times. Dare I  “soften the blow” of his hate speech spoken brazenly in public?

Please feel free to to share this Power Point especially if you teach Social Studies, or teach about the history of U.S. Civil Rights Movement or social justice.

When I show this Power Point in my classes I play the song “Mothers of the Disappeared” by U2, whose haunting lyrics mirror the horrors faced by the brave people, mostly students, who confronted brutality and hate with courage and conviction. Or sometimes I have them read the script as a play. We write about and discuss our responses to the images. To the words,

Sometimes we forget, or diminish, the history of oppression in our own back yard. And then we are forced to confront it again, as the debacle of the trial for George Zimmerman indicates–Have we really come that far? And though we have far to go, we must honor the courage and conviction of those individuals shown in Charles Moore’s photographs by matching theirs with our conviction and courage to never give up.

The POWER POINT CAN BE FOUND HERE  https://educationalchemy.com/?attachment_id=573