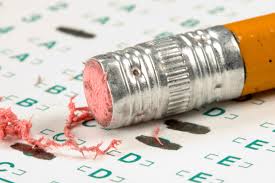 There’s a saying in certain addiction recovery circles that “One drink is too many and a million is not enough”—this phrase suggests that once an alcoholic takes the first drink there’s no guarantee they can control how many more they will take after that, or what will happen. I suggest that one of the reasons we are still so enmeshed with a test-driven reform mentality in spite of all the data and research documenting its destructive nature, is because we have a societal addiction of sorts to a test-driven dependency. One test is too many and a million will never be enough. While this might sound outlandish on the face of it, the similarities are so many this suggestion warrants our consideration.

Rhetoric around the supposition that standardized testing is necessary to defend a social justice approach to remediating inequities within our public education system is currently being defended by certain leaders within some civil rights organizations.  Why?

The definition of insanity is doing the same thing over and over again, and expecting different results. We have had several decades of test-driven accountability in the name of equity and fairness. It has not worked, and it will not. Ever.

Our societal obsession with standardized testing parallels an addiction mentality in that it perpetuates similar patterns of denial (the hallmark of addictive thinking): 1) denial –that poverty does matter, 2) denial– that the standardized tests themselves are the problem, and 3) denial– of our inability to limit or control the amount of testing that will occur. The parallel corollary is to that of an alcoholic who keeps saying “I can control it” or “I’ll just have one or two” when the outcome is always the same. The need for more.

The reauthorization of ESEA is underway promising the potential reduction in standardized testing, to be controlled at the state (rather than federal) level. Bear in mind that the new Alexander and Murray ESEA bill “Every Child Achieves Act” leaves “the details regarding the mandated tests up to the states” (Scheinder) which means that, “States will also be permitted to include other measures of student and school performance in their accountability systems in order to provide teachers, parents, and other stakeholders with a more accurate determination of school performance.” Do you really believe they’ll just “stop at one” (aka grade span) or keep it “under control” (no stakes)? There will always be the distorted justification for “just a few more.” Billions of dollars of profits to the testing companies who wield lobbying and political control over state level policy makers have too much to gain. We are addicted to the greed, and social control that are manifest in the implementation of these tests. The attraction for them is just too great to say no. Once you start it’s hard to stop. We cling to an ideology of schooling driven by competition, sorting, tracking, and measuring that depends on standardized testing to “feed the need”.

To illustrate this point further I feel the need to point out the parallels in addictive thinking between someone who says, “Well, you would drink too if you had my problems” while ignoring that fact that most of those problems are created by the excessive drinking– and a society that insists, “Well, you would need standardized testing too if you had our educational inequities” while ignoring the fact that those inequities are exacerbated by the testing itself.

One of the ways in which someone struggling with an addiction attempts to “manage” their problem is by switching things up: from vodka to wine, drinking at home rather than bars, being sure to eat before going out. However, the results for the problem drinker are always the same. Likewise, as a standardized test obsessed society, we cling to the idea that if we can just switch to “better” standardized tests, or from federally mandated to state-mandated, that somehow therein lies the “miracle” solution. The results, again, will be the same.

“Half measures will avail us nothing.” We should instead demand a revolutionary way of creating equitable, democratic, and meaningful public schools that serve all children. Until any reliance on standardized testing to shape how, who, or what we teach is eliminated, the possibilities for this revolutionary change remains daunting. By its very existence (even in reduced capacity), it will remain the focal point, the “True North” that drives how/what we teach, how we define children’s success, and how we perceive teacher quality.

Why do policy makers who claim to fight for equity and justice not instead amplify and support programs that have actually demonstrated sustainable and meaningful results for students of color? Why are there no petitions, press releases, or high-priced lobbyists out there promoting programs that embrace student agency, culturally relevant pedagogy, and real social engagement? Here are a few examples:

In fact, in spite the amazing evidence for success of these programs, and the love expressed by students in these program FOR these programs (….ever seen students FIGHT to keep standardized testing?) two of the three of them were roundly dismantled.

Youth Dreamers is a student-led organization that created a youth-run youth center that would employ teens and creatively serve children of all ages. In building this program (and buying and fixing up their very own house for it) students learned real life skills they never would have gotten from any test. They learned how to: write letters, campaign, build community, read blue prints and financial spread sheets, understand basic architecture, and a myriad of communication skills. Yet, after a year of “low test scores” the program was cut. While it still exists outside the original school where it was founded, they lost their house and struggle to keep their existing programs

The Ethnic Studies Program in Tucson AZ showed a tremendous growth in graduation and college acceptance rates for the youth in that program (largely Latino/a students).  They felt empowered. They began to love learning. They had hope. What happened? The state of Arizona deemed the program illegal and banned it.  While it was later reinstated in some form, they continuously face attacks from the AZ Dept of Education and state legislators attempting to silence and control their every action.

Baltimore Algebra Project, a student-led tutoring program continues to serve students in ways that truly maximize their wisdom, strengths and needs. Their “mission is to carve a community of leaders as well as exhibit leadership while remaining committed to the education of those in need of advancements in their socioeconomic status.” Name me a test that has EVER proven to do this successfully. Why is this not a model being grown to “scale” rather than desperately trying to build “better” tests?

It would be a powerful movement if the same civil rights leaders who so vigorously defend standardized testing in the name of equal opportunity for students of color in public education put forth even half the attention to lobbying for these programs and the creation of more like them, as they do in fighting to defend standardized testing. Why are we not spending time, media attention, and money growing the movement for democratic and equitable schools from the foundation of programs that have proven to make a difference? In other words: The only way to get equality in education is to demand equality through our actions. Tests do not create equality. PEOPLE DO.

It would be a revolutionary redirection of resources and attention (now squandered on testing development, implementation, and data collection) that would yield the results they (and so many more of us) wish to see for under-served and under-represented students and their public schools.

2 thoughts on “One Test is Too Many, a Million is Not Enough”