As Lee Fang says in The Nation “Venture capitalists and for-profit firms are salivating over the exploding $788.7 billion market in K-12 education.”

Meet iNACOL … aka International Association for K12 Online Learning. It is the most influential education technology trade group today.  Their Board of Directors includes Mickey Revenaugh, Executive Vice President of Connections Academy.  She is also former Chair for the ALEC education task force.

iNACOL also appears to be the delivery boy (or Trojan horse) for ALEC. Just look at the two screen shots from this 2013 webinar they hosted on the future of technology in education policy entitled “Inacol-2013-02-13-federal-and-state-policy-what-is-needed-for-digital-learning” 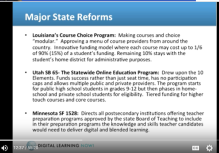 Curiously, the title of the state bills in these screen shots, which iNACOL promotes as positive change, have titles identical to ALEC model legislation:

The ALEC  bill states: “The Course Choice Program created by this Act would allow students in public schools and public charter schools to enroll in online, blended, and face-to-face courses not offered by the student’s school, and would allow a portion of that student’s funding to flow to the course provider. This Act creates an authorization process for providers and identifies provider and course eligibility criteria.”

And how about the Governor’s Digital Learning Task Force in Georgia? It too has an evil twin:

In 2010, the Foundation for Excellence in Education convened the Digital Learning Council, a diverse group of more than 100 leaders in education, government, philanthropy, business, technology and members of policy think tanks led by Co Chairmen Jeb Bush, and Bob Wise.  The 10 Elements of High-Quality Digital Learning were released at this 2010 National Summit on Education Reform. It’s an ALEC model-endorsed comprehensive framework of state-level policies and actions “designed to advance the meaningful and thoughtful integration of technology into K12 public education”

As for the “model” policies iNACOL is promoting from PA and MN? One only need to read the 2011 ALEC Annual Conference Substantive Agenda on Education which states:

“…the Task Force voted on several proposed bills and resolutions, with topics including: digital learning, the Common Core State Standards, charter schools, curriculum on free enterprise, taxpayers’ savings grants, amendments to the existing model legislation on higher education accountability, and a comprehensive bill that incorporates many components of the landmark school reforms Indiana passed this legislative session. Attendees will hear a presentation on the National Board for Professional Teaching Standards’ initiative to grow great schools, as well as one on innovations in higher education.”

So…what’s in YOUR state?

4 thoughts on “iNACOL IS DELIVERY BOY FOR ALEC’S MODEL LEGISLATION: What’s in YOUR state?”