BEWARE OF THE RHINOCEROS-THEY ARE EVERYWHERE

I can also easily imagine hopeful change, because I still posses my imaginative capacities.  Without them we are dead in the water.

In the words of Chris Hedges, “Artists, writers, poets, activists, journalists, philosophers, dancers, musicians, actors, directors and renegades must be tolerated if a culture is to be pulled back from disaster.”

I first came across the term creative solidarity as it was described by scholar, educator and activist Ruben Gatzambide-Fernandez a couple of years ago. More recently out of curiosity I Googled the term and stumbled across a myriad of other ways in which it used from everything to market jewelry to serving as the title for a artists cooperative in the UK.  A lot of people like it use this term for many reasons-a phrase to define or redefine their art work, concepts of solidarity in community efforts, and as a framework for organizing group efforts in innovative ways.

And the way in which I will use it here is will be defined by my own individual understanding as well, however I do draw specifically from Gatzambide-Fernandez in particular as it was his description that motivated me to think more deeply about what the term (the two words combined) have the potential to mean in out current fight against ed reform.

I make no claim to have a mirror image reflection of Gatzambide-Fernandez’s own ideas here- he goes much farther into depth with theory than I have room for in this blog. Rather, I draw from  his ideas as a springboard for possible further considerations in my own understanding of what these words can mean for us fighting education (de)form.  For me, drawing from his words, it is this notion of creative solidarity that I hope can inspire and shape our efforts to fight the corporate take- over of public education.

Because in this sense, solidarity is not synonymous with “unity.” It does not require that we all act in unison to work together, and that in fact our differences, when brought together in emergent and creative ways, can become our strength.

Solidarity is not defined by nor defines who we are, but builds upon what we do.

For example, being in creative solidarity does not demand that all teachers take some same action because they are teachers as a unified identity. What we do, for those of us fighting ed reform, is hold a shared vision for public education, driven by our shared four goals: to end high stakes testing, challenge the common core standards as a forced, top-down, and oppressive mandate, eliminate Value Added Measure for teacher evaluation, and stop corporate (profit) driven privatization measures that use “school choice” to sell out public education and our children as blue chip stock options.

Forms of creative solidarity are less a call to teachers  telling them: “You must do this…” by virtue of your identity as a teacher, as much as it is a journey that each of us takes, compelled by our individual purposes or experiences, and that we find each other along the way and join forces through creative means. Solidarity, not in our common identity, but in our shared fight for a common good, one that exceeds the “benefits” any single one of us might receive, and yet which we might attain at various personal losses, is our course of action. We stand together as we move forward. Solidarity becomes a verb instead of a descriptive noun.

Why is creative solidarity needed?  The word  “creative” stands for two necessary items, the first of which I already mentioned briefly.  It suggests that ways in which we “come together” and work together occur through creative design.  We must find cracks, fissures, little and big ways in to, and around, power structures— that can only happen through our imaginative capacities. Drawing on Alfred North Whitehead’s complexity theory for understanding the universe, Gatzambide-Fernandez suggests that solidarity conceived as a creative act, is equally “chaotic” in that it cannot be manifest in some preceding design-it will emerge of its own accord, with no template, no plan, no unifying body to direct its course.  I stand in solidarity today with many people who are quite different than myself in any number of ways: gender, race, cultural or geographic background, religion, and age (to name a few).

The second way in which creativity is needed for solidarity is that we must be creative in how we approach our acts of civil disobedience, our acts of dissent, and empower ourselves and others to change the system, because the system right now really sucks. And our (shared) creative capacities might offer new visions and actions for fighting back.  So many days I think, and I hear others saying, “I just don’t know what to do anymore. How do you fight this? It’s too big. I’m out of ideas.”  We have to begin drawing from a new well of ideas and resources which provoke artful and imaginative possibilities. Without the imagination as Chris Hedges writes, we are dead in the water. It is our most powerful weapon. Let’s face it. When you see those ads on TV asking you to donate money to some fund to save starving children in where ever…what “gets” to you isn’t the words, or the facts-it’s the images. Or using  the song “In the Arms of an Angel” by Sarah McClaughlin to advocate for homeless animals. The emotional connectedness between us as human beings attracts compassion, attention, and compels others toward a better understanding of what we are fighting for.

Kevin Zeese of the Occupy movement echoes this idea of creative solidarity. He says:

The poet Charles Bukowski wrote a poem called Style in which he writes “To do a dangerous thing with style is what I call art.”

It’s clear enough by now that what we are calling for (demanding), and our actions, are both deemed “dangerous.” We’ve all had moments where others have told us to remain “silent or else…” had our jobs threatened, felt negative backlash for opting our kids out of HST, or for writing something that “might get us in trouble.” You have to seriously wonder if we are still living in a democratic society when speaking the truth, grounded in facts and proof, makes YOU appear crazy. It makes you wonder about the sanity of those who are fearful of you and perceive you as a threat. It makes you wonder how much Kool Aid is actually being poured into the citywide water systems.

But its’ time to get dangerous with some style. It’s time to get more creative in our efforts.

Through our creative collaborative efforts we again embrace a new sense of solidarity with one another. My goal in this fight is not to convince others to think like me. I am not here selling anything or to insist that others “join” in beliefs or actions. But I it is my purpose to reach out and join hands, paint brushes, or bull horns, with anyone who has a shared purpose.  We must start thinking creatively about how to change the dominant narrative that continues to wash over so many teachers and parents. Policy makers are a lost cause. DNR. Images, music, performances all have the power to affect our emotions which drive our beliefs oft times more than facts. When numbers and facts don’t work, a work of art or song can cause us to pause and think.  While art in and of itself doesn’t change a damn thing, how we work together creatively, and to what end, can.  The Situationists, guerrilla artists, DIY artists, and the work of Augusto Boal have been practicing art that criticizes the status quo society for decades.  I suggest that those of us fighting education reform follow suit.  We are not looking for “a few good artists.” We need communities (broadly defined) who wish to use creative arts-based measures as a central weapon in our arsenal to make change possible.

When I started the Dolls in the Box project  almost a year ago to date, one of the central aspects of that project was working together with teachers and students. While I could have made 100 dolls myself and staged the art installation in the front of the DOE as a lone artist, it would have been different in process and outcome. I didn’t want this to be “my” art project.  I wanted an arts-based process that would bring others together. So for two days, at the Free Minds Free People Conference in RI, I sat on the floor surrounded by fabric, markers, glue guns scissors, and scores of other teachers and students from all over the country, making dolls together. And as we sat, and cut and glued, we talked. They shared stories of school closings, and horrific stories of ed “reform” from their classrooms and communities. There’s something about the working together-in creative solidarity-in the process of working with our senses, with our emotions, with what we can see, hear, and touch that gave these teachers the opportunity to use their voices in a very different way. The Dolls in the Box installation did little to change the mind of the current education administration. I didn’t really expect it would. But I believe that it had an effect on the teachers and students who participated. Maybe they moved a little closer to feeling empowered. Maybe they moved a little closer to feeling hopeful.  The project on a larger community-developed and driven scale did not get the traction I had hoped for- what I held were visions of communities of parents, teachers, and/or students, making their own dolls in boxes and placing them by the hundreds in front of schools, libraries, or in front of classrooms (as a non verbal commitment to dissent).  Just imagine what a conversation starter THAT would be during test week or Back to School night! 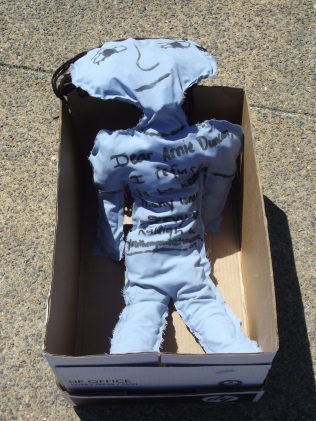 But there are so many other projects, actions, and works waiting to be created.

We must engage with each other more artistically to permeate the thick blanket of the ed reform narrative that holds public sway. We need more music like the Notorious PhD aka Mark Naison, and Barry Lane and image-makers like Susan Dufresne and Jay Rivett (I know I am leaving out many others who have earned recognition but I’m running out of word space!).  Our creative work must get “out there” to Main Street USE. Together, we can creatively change the narrative-developing an emerging solidarity as we go-and provoke action.

A blog focused on education and social justice