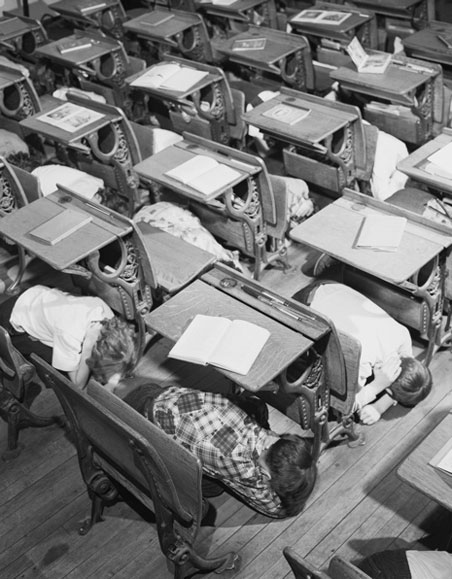 Upon picking up my two children, ages 5 and 7, from the bus stop today I was ready for our daily afternoon banter following my quintessential question, “How was school today?”  Usually, I get the vague “good” and sometimes even a great story about something fun or funny like when my daughter (in kindergarten) told me about her poor teacher Mrs. Y had to move them all to Mrs. X’s classroom because she found “poop” on her rug after recess.

And I have created a psychological filing system that prepares me to address the usual concerns I have over who wasn’t nice on the playground, or why they “got on yellow” for talking in the cafeteria, or tales of mind numbing Open Court lessons: I know how to deal with and even counteract these events.

But I had no psychological or emotional filing system for their stories today. Following the usual “How was your day?” my son (the older of the two) immediately announced, “We had the longest lock down ever!” Reading my face, which he is very adept at, he amended his comment and said “It was just a drill mom.”

My face softened a bit. But not my throat, which continued to tighten as my daughter (the younger) added in great detail how she and all her classmates had hidden in their cubbies, and she declared (with pride) how she had even covered herself with her backpack. Not to be outdone by his younger  sister, my son explained -as if he were an expert witness for an episode of CSI-in great forensic-like detail how Mrs. Z demonstrated precisely where to stand in the room so that they were neither too close to the door, nor in view of the windows. This is their summary of “what they did in school today.” No stories about Pokemon cards, shared reading, spelling tests, or music class.

I do not begrudge the school for these efforts. I know how desperately they are grasping at straws to keep our children safe.  I love my kids school and their teachers. I respect the administration.

How do we prepare against an unforeseen unknown? And how do children learn to develop and grow in a world riddled with fear? The first thing that came to mind when my kids were done providing me with all the details, and I was done (having a painfully overactive imagination) swallowing the vomit that had been rising in my throat picturing them actually having to enact these measures “for real,” I recalled the Duck and Cover drills of decades past. I am old enough to remember them. In hindsight, it’s infuriating to me that the military industrial complex could ever claim that simply hiding under a wood and metal desk with your arms over your head would somehow protect you from the effects of a nuclear explosion. Did any of them really ever really believe that would help? And how much of this potential threat was real anyway? Or were they just trying to simultaneously instill a false sense of security and a fabricated narrative of fear in us?And while we all ducked and covered, the military industrial complex had its biggest boom years.

I sit here typing, again picturing my five year old daughter huddled in a wooden cubby shielded by nothing more than My Little Pony back back, and being given some false sense of security that such efforts would stop the worst from happening if, god forbid, a lockdown were “for real.” I am disturbed by this image of course- but this is not what disturbs me most.

I am also disturbed by the possibility of things I cannot control nor foresee that sadly happen in our chaotic and violent society. But this is not what outrages me the most.

No. What infuriates me most about today’s story is knowing that out there are fat cat billionaire lobbyists doing their damndest to ensure THEIR RIGHT to free access to THEIR guns. And I don’t mean the hunting rifles. In the wake of the tragedy at Sandy Hook, the NRA reportedly has seen a growth of 8,000 members a day at $25.00 per membership. You do the math. That could pay a hell of a lot of new teachers to reduce class size or build new playgrounds. Meanwhile, the NRA “has blocked gun-control efforts in the past and is opposing any new ones.” The NRA’s solution is to provide hand guns to school personnel, or provide more armed security to schools. According to Daly, “Wayne LaPierre, has dismissed the assault weapons ban as ‘a phony piece of legislation’ and has recommended putting armed guards in all schools as a way to stop another school shooting.”

Duck and cover my friends. Such measures will do about as much good.  Or more likely, even do more harm.

I know … Let’s have more “zero tolerance” policies that send disenfranchised children of color to prisons at a rate exponentially higher than that of their White peers, for little more than bringing a nail clipper to school, while reaping huge profits to the prison system. I guess those kids’ rights don’t matter either in comparison to the Rights (capital R) of the Billionarie’s Boys Club.  Why do the policies set forth by the wealthiest most powerful corporate lobbyists always involve false (and harmful) solutions for us and huge profits for them?

Apparently what my daughter needs is to replace her My Little Pony backback with a bullet proof pack provided by Amendment II which “has reportedly tripled its sales since the Newtown massacre.” I don’t think she’ll mind. They actually have some with Disney characters and princesses on them. I swear, I am not making this shit up.

Why must my children live like prisoners in fear so that rich corporate billionaires can have their “freedom?” What about the rights of my children? Of all children? Schools, teachers and children are already imprisoned by the fear and sanctions of high stakes testing and education (de)form. Children have been put into the service of corporate interests, “mining their minds” (Sir Ken Robinson) for data that does not benefit them, but brings in billions of dollars of profits to the corporations who lobbied behind closed doors for new testing and evaluations because it serves them. Now, when children are not wasting away at their desks doing skill, drill, and kill to raise invalid and meaningless test scores, they’ll be practicing their lockdown techniques? Maybe we can replace the playgrounds or soccer fields with shooting ranges. Can you get PE credits for joining the NRA?

I refuse to allow my children to again be in service to the billionaire policy makers- playing “duck and cover” as ruse to ameliorate the grim realities of what I fear most: A total loss of the rights, freedoms, and real securities of our children so that others (who already live in abundance) may have more of theirs in abundance.

My children are not for sale. Are yours?

One thought on “Duck and cover: Back to the future”