I recently had the privilege of reading Dufresne’s powerful illustrated history of educational and institutional racism in the United States. Dufresne blends written narrative (which includes both research as well as personal experience) with the language of visual aesthetics. The result is a bittersweet composition of unspeakable sadness and indelible hope. The story unfolds not only in text, but in the lines, color, and style of her artistic talents. In recent decades graphic novels have developed increasing “legitimacy” in the halls of academic literature (not to mention dissertations- see Sousanis, 2015). Dufresne book has earned its place in the halls of this burgeoning “cannon” of alternative storytelling; alternative in the genre, as well as the narratives it chooses to include. In the case of The History of Institutional Racism, the aesthetic is the intellectual and the aesthetic is the lived experience.

The book is a visual journey, comprised of a series of brightly-colored highly stylized panels, each unfolding a moment in our oppressive and unjust history. Occasionally the panels are accompanied by a quote by W.E. Dubois or another significant scholar/activist. My favorite panel of all is this one: 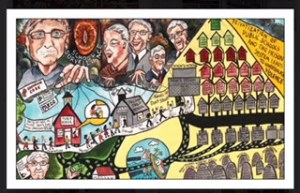 The series of 18 panels are followed by process-oriented reflections from the artist herself, and a thoughtful collection of questions for the reader. I appreciate this second section not merely as an addendum, but as a powerful compendium to the images, because it brings the artist in direct dialogue with her reader, and deepens our own reflections/responses to the artwork itself. Dufresne writes, “painting the panels became all-consuming and when I had more ideas than I could fit in the paintings I quickly picked up a marker and jotted down the research notes that I did not want to forget around the edges of my paintings.” The process and end-result reminds me of the creative process of “underpainting” coined by Sumara and Dennis (1998). As Irwin describes the process, “these paintings and the space between them, that is the underpainting, and the final paintings, illustrate an unfolding in/sights” (2003, p. 66). In underpainting, nothing is “erased.” Instead, the artwork, just as Dufresne does with the historically marginalized narratives of oppressed persons, is to scrape away at that top painted surface to reveal, “those ghosts and formerly rendered shapes that the artist (in this case, our dominant narratives) had intended to paint out forever” (Fraser, in Irwin, p, 66)

The result is a layering effect — of ideas and concepts, as well as layering of colors, words and images that evoke emotion. Dufresne embraces her creative process as a valuable piece of the understanding of the work itself… the process, not merely the product, strikes the reader as an important facet of examination. The work creates transformative and re-combinant aesthetic arrangements that lead to a reading/visual experience that “feels risky, dangerous, forbidden-for within it, we are able to imitate nothing but who we are” (Sumara and Davis, 1998, p. 2). The artwork renders the complexity of our collective experiences without reducing painful histories to platitudes.

Dufresne’s strongest aspects of this work are her intellectual passion and artistic integrity. What I mean is, she committed herself to the research and allowed emotion and intuition to move her hand across each piece of canvas, allowing the stories of the individuals included in each panel, to speak their truth to power. The story told through the creative lens of Dufresne influences the story being told, and offers a new way of seeing history so often discussed but so rarely understood (much less celebrated in any radical or authentic sort of way).

Going back to Maus (Spiegelman, 1996) the arts have been a means for telling powerful and painful narratives. Images, being synchronous, allow the reader to be a “viewer” taking in an entire image (thought, story, idea, or perspective) immediately (visually). Images offer a synchronicity of ideas rather than a diachronicity (linear over time). This matters imagistically; creating effective and compelling images where color, line, and flow “speak” to the reader/viewer in a unique stylistic fashion. Conceptually this also matters, because what was historically “then” is simultaneously what is “now,” and all historical moments are interconnected. We need to rethink time as “that was then…” and juxtapose moments across time and space as the reminder that everything we have been is eternally with us…now. What shall we do about it? The synchronous juxtaposition of different ideas in one image conjure, as Sandy Grande in the book’s Foreword says, “connecting the dots between racial difference, economic inequality, and the accumulative logics of capital.”. For example, Dufresne illustrates on p. 3 the corrupt neoliberal relationships between Bill Gates and the land grab – the panel asks us to consider what new connections can we make between the two, important connections which linear history limit us from imagining — and therefore limiting our possible actions is response. I found the “possible actions” section which is very useful.

The entire project was framed by the philosophy of the radical imagination citing the ideas of Max Haiven (2014) who states, “Our crisis of power is linked to our crisis of imagination: how can we envision and actualize resilient and powerful alternatives?” Stylistically and socially/politically it could be no other way. Dufresne is writing on the edges of our collective memories and marginalized histories — intersecting the creative process with re-imagining whose stories ought to be told. Dufresne committed her process to a radical imagining of “the possibilities of relational, transitive, and creative solidarity as a strategy for recasting not only human relations but also the very notion of what it means to be human,” which is “crucial for decolonization” (Gatzambide-Fernandez, 2012). Each panel in this books unfurls the deep emotional connection to destructive polices of segregation and violence done to the bodies and minds of people of color since the age of Columbus.

I feel it would have benefited from a brief explanation (an index in the back, or a footnote. Or…) of certain concepts unfamiliar to readers new to education history or policies, such as the Bell Curve or Common Core (What is it? Where did it originate? How does it connect with other concepts in that panel?) … Or, “the opt out movement”. Some readers may need to contextualize what these concepts are (i.e. Opt out of what? Why?). Without context or definitions, it’s more difficult to appreciate the connections Dufresne is making. I realize the design/scope of this book would make an addition such as this a challenge. But the book is immensely valuable and powerful and I would love to see it read by/reach people beyond those of us who already have an understanding of the general scope of racism as it intersects with education policy. In tandem with this observation, I believe the book would have benefited from a reference list at the back end of the book which lists all the sources used by Dufresne in her own research and those which are quoted in the panels/text themselves. Readers may be inspired to continue their own research and wish to pursue the same readings as the artist herself. As a work which I believe must be treated as an important scholarly contribution in academic settings (k12 and college classrooms), a reference list of sources cited/used is important.

Dufresne’s commitment to this project shows in every aspect of the work. It is evocative, provocative, and effective. It is a must-read for every classroom. By embracing the experience of underpainting her process, in the vein of the radical imagination, Dufresne gives of her talents and of herself; mind, body, and spirit. She invites us to take a journey to “underpaint” our own assumptions, our own distorted histories, and our subjective identities – to “read” her artwork “through the act of being and becoming, the process of living an aesthetic of unfolding” (Irwin, 2003, p. 73). I encourage you all to join her.

Irwin, R. (2003). Toward an aesthetic of unfolding in/sights through curriculum. Journal of Canadian Association for Curriculum Studies, 1(2), 63-78.

One thought on “Book Review: The History of Institutional Racism in U.S. Public Schools (2018, Garn Press) by Susan DuFresne”